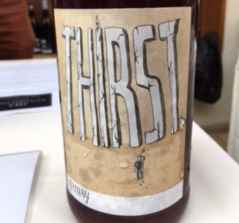 Sometimes you don’t want to have to think about your wine too much. There are days when you just want an uncomplicated glugging quaffer with plenty of fruit and freshness and enough character to make it a good partner for a meal, the wine equivalent of a bit of flirtation rather than a long-term relationship. Sometimes, in short, you want a bottle of gamay.

I’m a big fan of the gamay grape. Most often you’ll find it in Beaujolais, its homeland, although there are more than a few gamays made in the Loire. Increasingly, though, I’m coming across gamays made in the New World, and I couldn’t be more delighted. I’m hoping this means that the grape is shedding its poor image – tainted by vast lakes of poorly made Beaujolais Nouveau – and is now finding a new fan base.

This particular example is made by Radford Dale in South Africa’s Stellenbosch, a region better known for its dense, concentrated reds. I’m rather more taken with this fun, characterful wine than I am with many of the region’s more ‘serious’ wines. Its pretty dark pink colour hints at its brightness and freshness, and it has some of gamay’s typical red berry fruit, as well as a hint of herbaceousness. It’s not the most complex wine you’ll ever taste, but you’ll be damn glad to find you’ve put a bottle in the fridge for an hour before you tuck into a charcuterie platter and salads – or even a bit of grilled fish. Fun, isn’t it?